The 2008 edition of NAFS first appeared in Canada in the 2010 National Building Code, whose requirements were adopted by various provinces and territories between 2011 and 2014.

The fenestration industry did not expect to see a more recent version of the standard in the code until the following code cycle (based on the 2015 NBC). However, an unexpected November 2013 errata update to the 2010 NBC included the adoption of the 2011 version of NAFS in place of the 2008 version. (Apparently, this change was not intentional as it was not identified in the summary of corrections in the errata document.)

Catching industry participants by surprise, this change was cause for consternation. The 2012 BCBC does not recognize the 2011 edition, while the 2014 Alberta Building Code does; and in provinces that do not have their own provincial codes, it is possible that either NAFS-08 or NAFS-11 may apply, depending on whether code officials formally adopted this mid-cycle update to the national code.

The first change most readers will notice about NAFS-11 is that performance requirements have been reorganized according to “product families . . . and Performance Classes” (clause 0.1.3, page 1), and as a result, the following new clauses have been added to the table of contents:

The intent of the reorganization is purportedly to make the document easier to use. It suggests that those who are interested in Class R or LC windows, for example, are not interested in Class CW and AW windows, so there is no point in keeping them together. (You can come to your own conclusion about that one.)

There are, however, several consequences to this. For example, a specifier wanting to compare the differences between the classes for windows and sliding doors now needs to do a lot of flipping back and forth. Another consequence is that there are now multiple incomplete Gateway Requirements and Optional Performance Grade tables throughout the document, and there is no single table of all the available Performance Grades.

To help NAFS-08 users navigate the new document, there is a helpful new Table 0.1 on pages 3-6 that cross-references the 2008 clauses and tables with those of NAFS-11.

Fortunately, to help make the jump from NAFS-08 to NAFS-11 easier, the Joint Document Management Group (JDMG)—the organization responsible for managing the North American Fenestration Standard (NAFS)—has published a technical bulletin, TB 14-01, comparing the 2005, 2008, and 2011 editions of NAFS. You can view or download the JDMG TB 14-01 here to read the bulletin in its entirety.

The main changes from NAFS-08 to NAFS-11, as I see them, are summarized below.

The Parallel Opening Window (POW) product type has “an operable sash that moves outward in a horizontal direction perpendicular to the plane of the frame for the purpose of ventilation. The sash remains parallel to the frame throughout its range of motion.” Because POWs can have much larger sashes due to their operating mode, they could be considered “ventilating picture windows”.

The Mullion Assembly (MA) product type allows mullions to be rated with structural-air-water characteristics. This has implications for both testing and product labeling. Under NAFS-08, combination mullions formed when two windows abut side to side were qualified under AAMA 450, which required mullions to be tested for air leakage and water penetration but did not provide a way to record or label those ratings. The MA designator includes Product Class, Performance Grade, and size-tested parameters expressed in terms of mullion span and tributary area.

As I read the standard, I understood the Mullion Assembly designator to be intended only for combination mullions formed when individual units are joined together to form combination assemblies. There is no suggestion that it can also be used to report the performance of integral mullions.

Tubular Daylighting Devices also have new product type designators, to distinguish whether they are tested in an “open ceiling” (TDDOC) or “closed ceiling” (TDDCC) configuration.

Performance Classes have been wisely removed from all skylight products as there is no need for such a distinction for these products.

It is notable that the structural test load on glass skylights has been reduced slightly in NAFS-11. As a result, NAFS-11 tests of glass skylights are not backwards-compatible with NAFS-08.

Excluding the new product types introduced in NAFS-11, and glass skylights tested to NAFS-11, the bulletin asserts that “users, specifiers, and code authorities” are encouraged to “accept compliance to NAFS-11 as having satisfied any contract, specification or code requirement for compliance to . . . NAFS-08”. But don’t take my word for it: if testing equivalency to NAFS-08 is a concern of yours, I encourage you to download JDMG TB 14-01 and read it for yourself.

With respect to the differences between NAFS-11 and NAFS-08, the bulletin identifies the following product categories that are not equivalent between these two standards:

For manufacturers who have only tested products to NAFS-08, it is likely that your test lab can reissue your existing test reports with summary pages showing their NAFS-11 ratings. For manufacturers wishing to qualify products to both NAFS-08 and NAFS-11, for most products this can be done without additional testing costs if this need is discussed with your lab in advance. Folding door systems can continue to be tested as Specialty Products under NAFS-11. Photo courtesy of the Folding Sliding Door Company.

While this change is not mentioned in the JDMG technical bulletin 14-01, users of the standard will notice that the psf ratings in all the Performance Grade tables are now hard conversions from the metric values in Pascals.

In NAFS-08, the psf values were soft conversions rounded to the nearest 10 psf, but expressed with two decimal places. For example, in NAFS-08 PG35 was expressed as having a design pressure of 1,680 Pa (35.00 psf), while in NAFS-11 it is expressed as 1,680 Pa (35.09 psf). This change is not substantive as in NAFS, it is the metric values that are regulated by the standard. The change to precise conversions of psf values was likely intended to prevent misunderstanding of this intent by users.

Careful readers of NAFS-11 will notice that in Clause 1, the list of products “not intended to be tested to this standard” includes “folding door systems.” This was a concern to manufacturers of such systems who had been testing folding doors as Specialty Products under NAFS-08. Fortunately for those manufacturers, the JDMG technical interpretation TI 15-03 allows folding doors to continue to be tested as Specialty Products under NAFS-11, as discussed in this previous blog post. Download JDMG 15-03 to read the bulletin in its entirety.

The re-organization of the standard between 2008 and 2011 can be disorienting at first. Whether you are a manufacturer or a specifier, I hope this blog post will help you to easily find an understand what’s changed and what’s stayed the same in these two versions.

Note: The public review has now ended. NAFS, the North American Fenestration Standard, is jointly published and maintained by three associations: CSA in Canada, and AAMA and WDMA in the United States. On December 7, CSA... 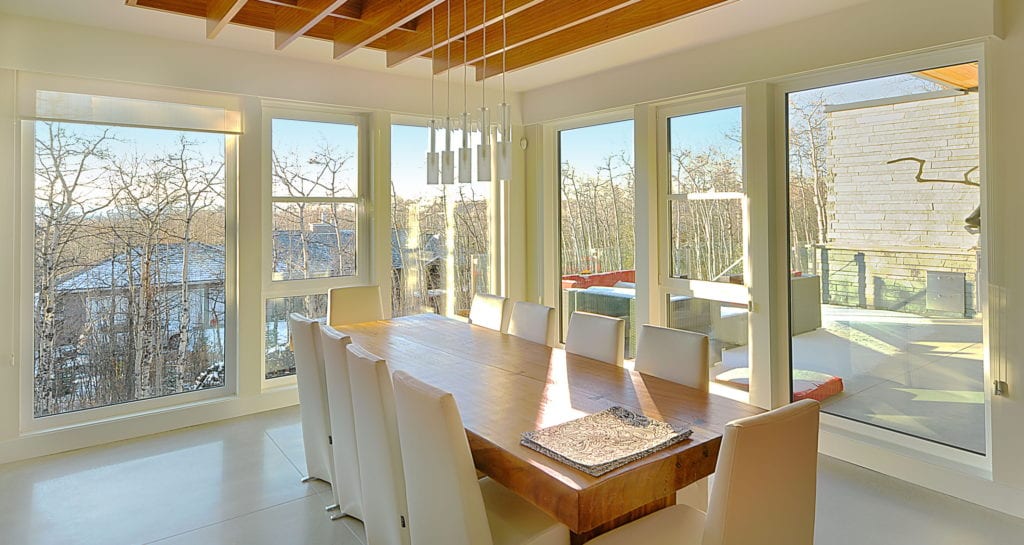 An alternative to NAFS testing for Part 9 buildings

The building code recognizes that it is not always practical to test every single window, door or skylight product to NAFS, and provides an alternative compliance path: "design and construction according to Part 5”.